There is a constant need of nutrients by the biotic community for their survival and they take these from the environment. Nutrients in the form of oxygen, carbon dioxide, nitrogen, phosphorus, sulphur or water exists in a definite amount in the environment.

The amount of these nutrients varies in different parts of an ecosystem at a given time. But these elements are never lost and nature has its own method of replenishing them in a cyclic manner.

It is a cyclic pathway by which a chemical element or molecule moves through the environment unlike energy flow which is unidirectional.

The carbon cycle is the biogeochemical cycle by which carbon is exchanged between soil, water and atmosphere (air) of the earth. It is the most important cycle of the earth and allows for carbon to be recycled by all of its organisms. 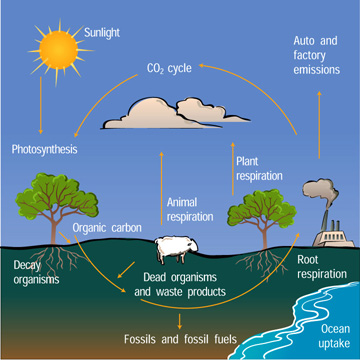 Nitrogen cycle is the biogeochemical cycle that describes the transformation of nitrogen and nitrogen-containing compounds in nature. Atmospheric nitrogen is the biggest source of nitrogen. Green plants absorb nitrogen in the form of nitrates and nitrites from the soil and water. Animals get nitrogen when they feed upon plants. Nitrogen is an essential component of proteins and nucleic acids in living organisms.

The nitrogen cycle is studied in five steps:

Nitrogen can be fixed in two ways:

a. Lightening during cloud formation: Nitrogen and oxygen combine with each other to form oxides of nitrogen in the atmosphere by lightening. These nitrogen oxides then dissolve in rain water and on reaching the earth’s surface becomes a part of the soil and water.

b. Free living micro-organisms present in the soil and by the symbiotic bacteria in the root nodules of certain leguminous plants: Microbes like the blue green algae and bacteria fix the atmospheric nitrogen into nitrites and nitrates. These nitrogenous compounds are then released into the soil.

The proteins in the body of the animals are broken down into simpler form like urea and ammonia. These are then removed from the body along with urine and excreta. Dead plants and animals also return nitrogen to the soil as ammonium compounds. These ammonium compounds are then converted to ammonia by ammonifying bacteria.

Denitrifying bacteria like Pseudomonas and Clostridium living in the soil reduce the soil nitrites and nitrates into nitrogen which is returned back into the atmosphere.

Water is very essential for all living organisms but the earth has a limited amount of water. The water keeps going from one component of an ecosystem to another component in a cyclic manner which is called the water cycle.