A magnet is a material or object that produces a magnetic field which is responsible for a force that pulls or attracts on other materials. The magnets that are commonly available in different shapes are:

If a natural magnet is suspended freely with the help of a string, it always rests in the north-south direction. If the magnet is slightly turned from this direction, it still returns to the same. The end that rests towards the north is named as North Pole while the one which ends at south is named as South Pole. They are represented as N and S.

The region around the magnet where the force on the magnetic needle occurs and the needle stops at a specific direction, is called a magnetic field. The direction of magnetic field is represented by magnetic line of forces.

The Earth acts as a giant magnet with south magnetic pole somewhere in the Arctic and north magnetic pole in Antaractic. The Earth also behaves like a bar magnet. It’s hot liquid centre core contains iron and as it moves, it creates an electric current that cause a magnetic field around the Earth.

The Earth has a north and south magnetic pole. These poles are not same with the geographic north and south poles on a map and tilted at an angle of 11.3 degree with repect to it. Due to this, if a magnetic needle is suspended freely, it rests in the north-south direction and is useful for navigation.

An electromagnet is a type of magnet in which magnetic field is produced by the flow of elctric current.

For making electromagnet take a piece of paper and give a cylindrical shape. Make several turns of a copper wire over this from one end to the other. This is called solenoid a long thin loop of wire. When the ends of the copper wires are attached to the ends of a battery (+ and –) current starts flowing through the coil which starts functioning as a bar magnet. 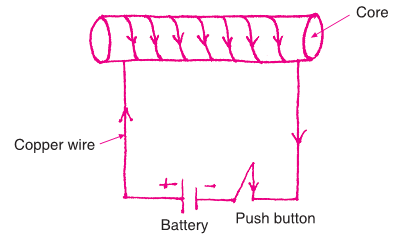 When the flow of current is stopped from the battery, then, its magnetic property ceases. If the +ve and –ve terminals of the battery are reversed, then the poles of the magnet are also reversed.

Electromagnetic induction is the production of an electric current across a conductor moving through a magnetic field.

Electric Generator is such a device that converts mechanical energy to electrical energy. Generators are of two types:

ABCD is a nonconductor frame on which copper wire has been coiled several times to form a rectangular coil. This coil can freely move between the N-S poles. This rectangular coil is made to rotate between two rings E and F. There are two contact brushes G and H attached to the rings respectively.

The rectangular frame ABCD moves between the N-S poles due to mechanical energy. The magnetic field entering into the face ABCD of coil increase from zero to some infinite value and continues to increase till the coil becomes normal to the field. The rate, at which the magnetic field liked with coil charges, is the maximum in the begining and then it decrease continuously. Thus, the induced current in the coil is maximum at time, t = 0 and decrease passing time. When the coil become normal to the field the rate at which magnetic flux of force charges become zero and hence current in the coil is zero.

When the coil further rotates the face of the coil through which magnetic field enters start changing the directing of current reversed. It keeps increasing till the plane of the coil does not become parallel to the magnetic field lines. Thus maximum current flows through the coil at this juncture. If the coil is rotated further, the area in contact with DCBA increase and the rate of change of magnetic field area becomes less.

Thus, the amount of current flowing through the coil decreases. When the coil is perpendicular to the magnetic lines of force then, current becomes zero. Now the north pole of the magnet is reversed. Current starts flowing from its original direction.

This also works like the AC generator. There is just one difference in its structure. There is a half rectangular rings rather than E and F rings as in AC generators.

The rectangular frame rotates and moves from a position parallel to the magnetic field to an upper one. The brush present creates a connection as electric current starts flowing. The current flows in the same direction. 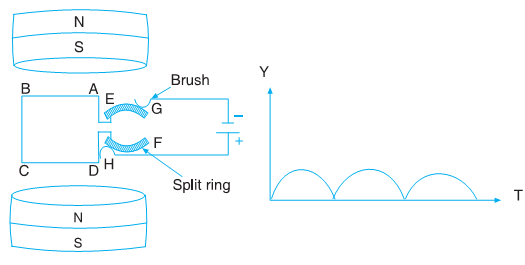