Internal Structure of the Earth

The knowledge of the internal structure of the Earth is derived from the studies and evidences based upon the density, the temperature and the earthquake waves. The earth is made up of several concentric layers with one inside another. 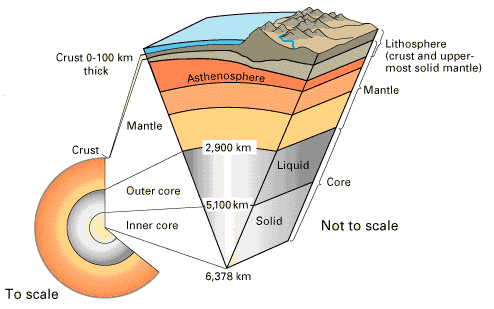 The portion of the interior beyond the crust is called the mantle. It is in a solid state. It has a density higher than the crust portion. The thickness ranges from 10-200 km. The mantle extends from Moho’s discontinuity to a depth of 2,900 km. The asthenosphere is the upper portion of Mantle. It is the chief source of magma that finds its way to the surface during volcanic eruptions. The crust and the uppermost part of the mantle are called lithosphere.

The inner most layer is the core with a radius of about 3500 km. It is mainly made up of nickel and iron (nife). The inner core is in the solid state whereas outer core is in the liquid state. The central core has very high temperature and pressure. The centre of the Earth is a solid core, the Inner Core. Core is the most dense layer of the earth. The density of this core is about 13 g/cm3. The inner Core is about 1300 km thick and is surrounded by an Outer Core of around 2080 km. The Outer Core appears to be molten.

At the centre or the Inner Core, at a depth of some 6370 km, temperature goes up to some 4000°C and pressures reach nearly 4 million atmosphere. Starting at an average depth of from 45 to 56 km below the top surface of the Earth, the Mantle continues to a depth of 2900 km where it joins the Outer Core.